The Eszett letter in German 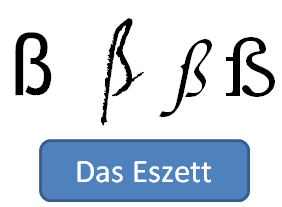 The letter Eszett, also called scharfes S, is a letter that only exists in German. It has a pronunciation like that of an [s]. Up until 2008, only the uncapitalized form existed because a word never starts with ß.

Due to historic reasons, this letter is not used in Switzerland. Switzerland decided to use keyboards designed for specific letters from the French language, thus eliminating the Eszett from its alphabet.

In other German speaking countries the Eszett is still used normally.

The difference between ß and SS

The Eszett is pronounced as [s], but it marks the preceding vowel as long lets us know that there is a diphthong

In the case of the previous example, the pronunciation of Straße is 'Straaaaaaaaaaaaase'

heißen
to be called

In general before diphthongs the Eszett is used instead of ss

Pronunciation of the SS

SS emphasizes that the preceding vowel is short

Some people starting to learn German write β (beta, like the Greek letter) instead of ß (Eszett), which is incorrect.

Typing the Eszett with your keyboard

A problem that we often have when writing texts in German is that we do not have ß on our keyboards.

To solve this problem, we can use the combination: