The Date in German 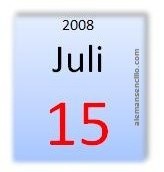 In German, dates are written with the formats:

In German the days and months are ordinal numbers but the years are cardinal.

You have to keep in mind that ordinal numbers are declined like adjectives:

it is read as:

it is read as:

am ersten zweiten zweitausend neun (in the dative)

Asking what the date is

This is how you as the date in German:

Welcher Tag ist heute? ... Es ist der erste Mai
What day is today? …Today is the 1st of May

Welchen Tag haben wir heute? ... Heute haben wir den ersten Mai
What day do we have? …. Today we have the 1st of May

Pay close attention to the first example. The date is in the nominative and in the second one it is in the accusative.

Seasons of the year (die Jahreszeiten)

Days of the week (Wochentage)

Parts of the day

Before and After Christ (Death)