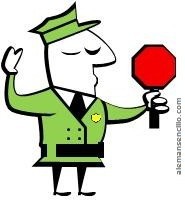 The imperative is used for expressing an order and it also exists in English, its use being the same in both languages. In German, it is called Befehlsform and the imperative sentence: Aufforderungssatz.

Trink ein Bier mit mir!
Drink a beer with me!

Steh auf, wenn du am Boden bist
Stand up when you are on the ground

Note: The imperative does not exist for modal verbs.

Original forms for the imperative

The original imperative only has 2nd person singular and plural forms, the clause lacking a subject.

Conjugation of the second person singular for the imperative

For most verbs, the imperative is constructed with the 2nd person singular of the Indikativpräsens and by taking off the "-st" ending.

Pay close attention: Although there is no vowel change of "e" to "i" or to "ie" in the stem of the last two examples, the verbs keep complying with the rule that has been shown. In some cases and with some verbs, an "-e" is added in the imperative. For the imperative of studieren, it is not just valid to say studier but also studiere.

Due to the union of the "-s" with the last letter of the stem, only the final "-t" is removed:

In the case of strong verbs that acquire an Umlaut

Verbs that acquire the "Umlaut" in the second and third person singular lose it in the imperative:

In the case of infinitives ending with "-rn" or "-ln"

In the case of auxiliary verbs

In the imperative, auxiliary verbs don't follow any rule and you have to memorize them. Fortunately, there are only 3.

Conjugating the second person plural of the imperative

The conjugation for the 2nd person plural is very easy because it is the same as that of the present indicative.

Forms added to the imperative

The conjugation of the imperative with forms added on is very simple: You just have to know the infinitive of the verb + to whom the order is given (wir [we] o Sie [you formal]).

The Particles "bitte" and "doch mal"

The imperative can sound very impolite in German. To make a phrase that sounds more polite, one of the following particles is added:

It means "let's go" or "come on" in the sense of encouraging your conversation partner to carry out an action.

Negation with the imperative

To construct a phrase with negation in the imperative, the particle "nicht" is simply added.

Iss nicht so viel
Don't eat so much

6 Comments
#6 [Sudhir]2017-11-27 10:17
Very well explained. I was doing imperatives. Hope other parts of grammar are likewise easily explained. Has been a great help. Now learning this language has become quite interesting.Thanks .